From creating dishes to delight diners as a chef in Venezuela to mentoring high school students who hope to break into Chicago’s culinary scene, the secret ingredient driving Yves Chambaz’s success has always been his desire to forge strong connections.

Chambaz got his first taste of the culinary arts after training for a job as chef at the restaurant Posada La Cigala in Los Roques, Venezuela. While working in the eatery’s open-concept kitchen, Chambaz got to witness his guests take their first bites of their meals during dinner service. “That was the moment I realized I wanted to do this for a living, to make people happy with my food, to create experiences with my hands and share them with total strangers,” he says.

Chambaz eventually made his way to Chicago, where he was a Foundation for Culinary Arts (FFCA), award recipient two years in a row. In 2019, he graduated with a degree in hospitality management with a concentration in sustainability.

“The most rewarding part of being a [FFCA] recipient was the opportunities to connect with others, with students in a similar situation as mine, to network with industry professionals and with other influential people in the local hospitality and food scene in Chicago,” he says, calling the scholarships “more a professional launching pad than a financial aid.”

As he worked toward his degree, Chambaz taught culinary and hospitality skills to students in Chicago Public Schools. “After graduating I learned that my place was in the classroom, making an impact on youth, discovering and preparing members of the future workforce for this amazing industry, the hospitality industry,” he says.

Chambaz is now employed as a full-time instructor at Morton East High School in Cicero, where he teaches culinary arts under the Career Technical Education department. “I love it when a student finds their calling in my classroom, when they discover their passion for service to others,” he explains. “I literally give these students everything I know—I share with them every opportunity there is for their professional and personal growth; I mentor them and train them for competitions; I advise and coach them for job interviews; and, most importantly, I believe and help them believe in themselves and the power they have to accomplish their goals.”

His success story as a FFCA award recipient is an inspirational example he uses to encourage his students to “chase their goals, no matter how big they might sound.” And once they’ve made it, Chambaz hopes those he’s connected with as a teacher and mentor will continue the positive life-changing cycle and support others who are striving to achieve their culinary dreams—even as Foundation for Culinary Arts contributors did for him. “One should give back whenever possible and help missions like [FFCA] to develop and bring more people up,” he says. 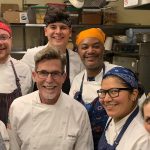